Cotton prices have retreated to the lowest level in nearly five years as investors worry that global production could overwhelm demand for the fiber.

The U.S., the world’s biggest cotton exporter, is expected to produce a large crop in the season that begins Aug. 1. But global demand is likely to fall short, especially with top importer and consumer China wrapping up a 2½-year stockpiling program. U.S. government forecasters predict the amount of cotton left over in warehouses world-wide when the next season ends will reach an all-time high of 105.7 million bales.

president of brokerage Flanagan Trading Corp. in Fuquay Varina, N.C. “Prices are on their way down to the 50-cent level.” 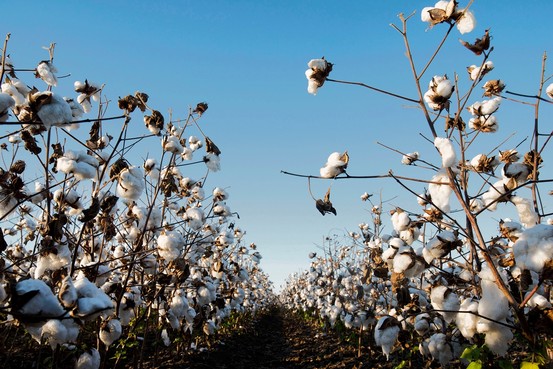 “We’ve had great weather and that’s got everyone on the run,” said

After years of drought, Texas has begun to see rain in cotton-growing areas. Government forecasters, citing the rainfall, recently increased their estimate for U.S. cotton output during the 2014-15 season by 10% to 16.5 million 480-pound bales, exceeding market expectations for a 4.7% upward revision to June’s estimate.

There are also concerns about weakening demand. The International Monetary Fund recently cut its global economic-growth forecast for this year to 3.4% from an April estimate of 3.7%, damping sentiment in the cotton market. Cotton prices are particularly sensitive to economic data, because demand for the fiber is tied to consumer spending on items such as apparel, bed sheets and towels.

China had been a major support for the market, quadrupling its stocks since it began a strategic purchasing program in late 2011. But that program is wrapping up, as China has had trouble unloading its massive stores of the fiber on the domestic market.

The recent drop in cotton prices could spark defaults from mills that contracted cotton at higher prices, said

After prices plunged from a post-Civil War high three years ago, a wave of defaults by mills hit balance sheets at some of the largest cotton traders, setting off a surge of legal battles, some of which are still unresolved. “It’s always the elephant in the room,” Mr. Lea said. “Anytime you get a move down like this, the risk exists.”

president at Infinity Trading Corp., a brokerage in Indianapolis, expects prices to slide to 60 cents a pound in the near term. “We’ve got large production and questionable demand,” he said.

—Leslie Josephs contributed to this article.

Write to Alexandra Wexler at alexandra.wexler@wsj.com

A small but growing number of Australian farmers, under pressure from a strong currency and rising costs, are pushing aside commodity traders in a bid to boost earnings.

Whether on their own or in cooperatives, these farmers are selling direct to Asian buyers—bypassing traders like Louis Dreyfus Commodities and Cargill Inc., which dominate the global trade in agricultural commodities.

Australia is among the world’s top suppliers of wheat, beef, cotton and sugar, and is seen as crucial in filling the gap as global food demand grows an expected 80% by 2050, including major growth in Asia.

But rising costs and mounting debt, accumulated through years of drought, as well as the lure of more-lucrative mining jobs are pushing farmers out of the business. Australia’s rural population is expected to fall by half in the next decade.

“To make a reasonable living as a farmer under current prices was becoming untenable,” said Queensland cotton farmer Glen Rogan, who plans for the first time to sell all his 6,500 bales of high-quality fiber direct to Asian mills, and hopes to earn a 30% premium by doing so. “That was the only way I could see to stay relevant and viable.”

Direct deals also appeal to some buyers, who like the farmers see it as a way to cut costs and improve their negotiating position. Many companies in fragmented industries like textile manufacturing or flour milling think the “ABCD” trading houses—Archer Daniels Midland Co., Bunge Ltd., Cargill and Dreyfus—along with Singapore-based traders like Noble, Olam and Wilmar, hold too much sway in the supply chain.

On a recent Australia trip to look for suppliers, Chen Jun, general manager of Chinese cotton importer and spinner Zhangjiagang Free Trade Zone Worldway Import and Export Co., said one issue with buying from the big merchants is the international standard contract. It specifies fibers of between 3.5 microns and 4.9 microns, which means Worldway gets a lot of cotton that is too heavy for its spindles.

“We want to find a way to buy from the growers or gins,” Mr. Chen said. “Saving even one cent a pound is worth it for us.” Worldway, based north of Shanghai, buys 120,000 metric tons of cotton a year that it spins or sells, and about 60% of it comes from large merchants.

Traders say they benefit both farmers and consumers.

Josh Martin, Head of Trading & Risk Management at Cargill, said large companies allow farmers to stagger sales, which can get them better prices. The large companies also take on weather risk, a major factor in drought-prone Australia, provide long-term infrastructure investment, and bear the costs if contracts don’t get paid.

Merchants have been pushing hard into Australia’s grain sector since the breakup of the government’s central exporting agency in 2008. ADM is closing on a 3.4 billion Australian dollar (US$3.3 billion) deal for Australian trading company GrainCorp Ltd. That would give ADM, Glencore and Cargill a combined slice of nearly 60% of wheat shipments from Australia, the world’s second-largest supplier, and put almost all the country’s export infrastructure under foreign ownership.

Merchants are loath to disclose sensitive profit margins. Some traders suggest these amounted to $50 to $100 a ton when cotton prices were at their 2011 high, and Mr. Watson reckons farmers need a premium of $20 to $30 a ton, net, to make marketing direct worthwhile.

There are costs to going it alone. Farmers can’t sell their crops ahead of the harvest, making it harder to pay for fertilizers and pesticides when needed. They take on price, exchange-rate and weather risks, and face the possibility of jumps in storage and transport costs.

Their risks are particularly great when prices are volatile. The sudden fall in world cotton prices last year prompted mills to cancel purchases, sending contract defaults soaring. Disputes in Australia alone rose to a record A$400 million—costs shouldered by the merchants, estimated to control more-than 80% of exports.

“I can see the benefits of going direct, but you need to have deep pockets if it goes wrong,” said Adam Kay, chief executive of industry group Cotton Australia.

Cotton Futures Head for Longest Slump in a Year

Cotton prices fell, heading for the longest slump in a year, as U.S. government reports spurred economic concerns. Orange-juice futures extended a rally to the highest in 13 months.

The U.S. economy expanded less than forecast in the first quarter, and more people filed claims for unemployment-insurance payments last week, separate reports showed today. The price slide started on May 20, partly on speculation that demand will ease in China, the world’s biggest user, amid estimates for slower economic expansion.

“Since cotton is a little more sensitive to what’s going on economically, that might explain why it’s down,” Sharon Johnson, a senior cotton specialist at Knight Futures in Roswell, Georgia, said in a telephone interview.

Cotton for July delivery dropped 1 percent to 79.92 cents a pound at 1:33 p.m. on ICE Futures U.S. in New York. The price fell for the eighth straight session, the longest slide since mid-May 2012. Earlier, the commodity touched 79.87 cents, the lowest for a most-active contract since Jan. 23. The fiber headed for the biggest monthly drop in a year.

Yesterday, the commodity jumped 3.2 percent, the most in three weeks, on concern that crops in Florida may be threatened during the Atlantic hurricane season that starts June 1.

Brazil is the biggest orange grower, followed by Florida.

To contact the reporter on this story: Jen Skerritt in Winnipeg at jskerritt1

To contact the editor responsible for this story: Steve Stroth at sstroth