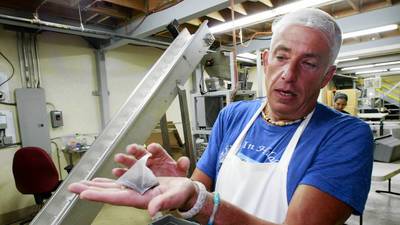 Tea expert David DeCandia explains how his company, Coffee Bean & Tea Leaf, makes a variety of brews at the firm’s processing facility in Camarillo. Tea’s popularity has been a long time coming for the self-taught DeCandia, 53, who early in his career had to create blends by mixing leaves with a snow shovel on a steel floor.

Tea expert David DeCandia has spent his entire 17-year career in the shadow of coffee.

At his employer, Los Angeles beverage chain Coffee Bean & Tea Leaf, coffee comes first in the company name. It also takes up most of the company’s processing facility in Camarillo and brings in 90% of the revenue.

But more Americans are complaining that their coffee buzz feels like a hangover, citing concerns about over-caffeination and high prices. DeCandia is reading the tea leaves — and seeing a cultural shift toward his brew of choice.

“The tea industry is going straight up, and at some point, it will reach the level of coffee,” he said, standing in a lab ringed by porcelain cups, maps of tea estates and bags of dried Oolong. “It’s time. People have maxed out on other types of beverage.”

Americans developing a hankering for tea are turning one of history’s oldest drinks into what may be the beverage industry’s sexiest new offering.

Domestic tea sales at restaurants, grocery stores and shops reached $15.7 billion last year, up nearly 32% from 2007, according to consumer goods research firm Packaged Facts. In the next two years, the market is expected to expand to $18 billion.

Corporate America is taking notice. Soda giants PepsiCo and Coca Cola are plugging teas through brands such as Brisk, Honest Tea and Fuze. Tea-infused waters, soft drinks and energy drinks are increasingly prevalent. So too are tea-flavored booze options such as spiked iced-tea brand Twisted Tea and Arnold Palmer Hard, a mixture of iced tea, lemonade and alcohol.

“We could do for tea what we’ve done for coffee,” Schultz told investors. “This is a big, big opportunity.”

But Earl Grey still has a while to go before overtaking joe.

Last year, the American tea industry pulled in $987 million in revenue at the wholesale level, a tenth of the $9.6 billion for coffee manufacturers, according to research group IBISWorld. And it’s not just java — tea consumption domestically also lags behind bottled water, soft drinks, milk and juice.

Still, the ancient brew may be catching up.

Tea drinking is growing in the U.S. at a faster rate than coffee, according to IBISWorld. In the last decade, the amount of tea consumed by the average American grew 22.5% and will rise an additional 3% in the next five years. Coffee slumped 1.9% between 2003 and 2013 and will grow less than 1% through 2018.

Coffee and soda are facing a backlash from authorities and consumers over health concerns. Coffee also is struggling with supply chain disruptions and an overcrowded market.

Tea could rocket past coffee sales by 2017, coffee and tea industry panelists said at last year’s World Tea Expo in Las Vegas. Two years ago, a record 281 million pounds of tea was imported into the U.S., according to the Tea Assn. of the USA.

The surge is driven by consumers such as Christopher Caplan, 21, who in the past year has gone from drinking as many as five cups of coffee a day to weaning himself off the “really addictive” stuff with a daily cup of tea.

“It got really bad,” the Koreatown musician said of his coffee habit. “And there’s so much more variety that you can get out of tea — not all of them caffeinated, so many with ingredients that have healthful qualities.”

The tea market is attempting to shatter its reputation as a bland liquid served from unwieldy porcelain pots.

The beverage is becoming more portable — a key selling point for an on-the-go nation. The growth rate of bottled tea sales is outpacing that of soft drinks, according to several studies. More teas are being sold in convenience stores and fast-food outlets such as Sonic Drive-In, which in April launched a new line of iced green teas with multitudesof flavor combinations.

Now, tea retailers are targeting coffee shops as they attempt to bring tea out of the home.

It’s a tricky endeavor, considering that Starbucks alone has about 13,000 coffee-focused cafes in the country. There are 4,000 specialty tearooms and retail shops in the U.S., according to the Tea Assn.

Still, small Southern California chains such as Bird Pick Tea & Herb and Chado Tea Room — where one wireless password is “no coffee” — have gradually expanded. And experts believe that new gadgets — one mimics an espresso maker by quickly creating standardized cups of loose-leaf tea — could allow tea to be served via drive-throughs.

Tea’s popularity has been a long time coming for the self-taught DeCandia, 53, who early in his tea career at the Coffee Bean & Tea Leaf had to create blends by mixing leaves with a snow shovel on a steel floor.

When he arrived at the company, fresh off a gig as an oil distribution manager for Halliburton Co., he was a warehouse worker. There was no official position for a tea expert partly because low demand didn’t warrant one.

These days, tea’s share of overall Coffee Bean & Tea Leaf sales has increased to 15% from 3% in the late 1990s. The company this year erected two buildings at the Camarillo warehouse dedicated to the tea operation, giving DeCandia 10 times the space he used to have. A new tea bagging machine was ordered.

DeCandia — tanned, flip-flop-wearing and fond of the word “dude” — even penned a children’s book called “Master Davey and the Magic Tea House.” The recent popularity of his favorite drink, of which he downs three gallons a day, hits close to home.

“My daughter says that all of her friends dig tea now,” he said. “And why wouldn’t they?”